Match 13 of the IPL 2022, RR versus RCB Predictions for the match in today’s IPL encounter between RR and RCB, who will win? Dream 11 Team Prediction

Rajasthan Royals have won both of their IPL 2022 matches thus far.

The Rajasthan Royals will face Royal Challengers Bangalore in IPL 2022 Match 13 at Mumbai’s Wankhede Stadium. Both sides are coming off victories in their previous meetings and will be trying to keep the winning streak going. The club from Jaipur has won both of their games so far and is currently leading the points table with an amazing net run rate. Sanju Samson has commanded the team admirably, and their bowling attack appears to be tough.

The Royal Challengers Bangalore, on the other side, were defeated by the Punjab Kings in their first match after failing to defend 205 runs in 20 overs. They did, however, win their following game against the Kolkata Knight Riders, albeit not convincingly, as they nearly faltered in a low-scoring chase. They’ll be hoping for a decisive win to boost their team’s morale.

Details of the Match in Advance

The dew that comes into play in the latter portion of the game has favored the side batting second in each of the three games played at the Wankhede Stadium thus far. The pitch is ideal for batting, and having wickets in hand will be crucial in putting up a total. Based on previous results, the captain who wins the toss will most likely bowl first again.

Virat Kohli is the most likely hitter of the match.

Virat Kohli was removed for 12 in the previous game against the Kolkata Knight Riders after smashing two superb boundaries, and he will be keen for a big score. With an unbeaten 29-ball 41 against the Punjab Kings, the right-hander got off to a fantastic start and has looked in good form anytime he has been at the crease. In important games, he likes to step up, and he’ll have a significant part to play against Rajasthan Royals’ star-studded bowling attack.

Harshal Patel is the most likely bowler of the match.

Harshal Patel had a great season with the Royal Challengers Bangalore last year, and he’s off to a great start this year. In his previous match against the Kolkata Knight Riders, the right-arm seamer took 2 for 11 while also bowling two maidens in the middle overs. In the previous two seasons, he has developed into a match-winner for the team and is particularly good in the death overs, making him one of RCB’s most dangerous alternatives.

Jos Buttler and Shimron Hetmyer played knocks of 70 and 42 respectively as Rajasthan Royals posted 169/3 in the 20 overs against Royal Challengers Bangalore after being asked to bat in the 13th match of IPL 2022 season at the Wankhede Stadium in Mumbai.

Faf du Plessis’s Royal Challengers Bangalore had gotten off to a steady start in a chase of 170 after Anuj Rawat and Faf put on 55 runs for the opening wicket but this stand had finally come to an end in the 7th over as Yuzvendra Chahal removed Faf. In the next over, Navdeep Saini struck to dismiss Rawat and RCB was pegged back in their chase. Sanju Samson’s brilliance brought out Virat Kohli’s dismissal and David Willey was then removed in the same over.

Dinesh Karthik and Shahbaz Ahmed are going all guns blazing and the duo are tearing into Rajasthan Royals’ bowline lineup as Royal Challengers Bangalore look to chase down 170.

In the End, Royal Challengers Bangalore won by 4 wickets.

Today's Cryptocurrency Prices - Bitcoin is up, but Dogecoin is the greatest gainer

Bitcoin SV (BSV) Things You Need To Know Before Investing

Josh Reynolds, Bulldogs star, was spotted at the match with his stunning new girlfriend 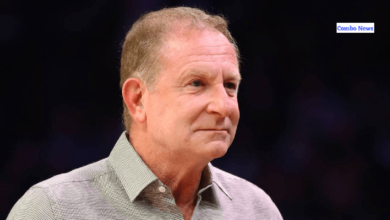 After Robert Sarver announced he was selling the Suns, the Lakers said LeBron James was “proud” to be a part of the NBA.